listening at the speed of life

Be Great or Go Home.

I saw powerful images of a Warrior and knew that UT was the place where I could shine. I couldn’t play a lick of basketball, but you couldn’t tell me that I wasn’t going to meet Pat Summitt on campus while walking to class one day. Try denying it, and I would emphatically defend that fantasy until you were a believer.

The Big Orange glow lured me into the graduate school application process years later when I decided to become an educator. I applied to both UAB and Tennessee. My grandmother was sick and I decided to stay in Birmingham. My letter from Tennessee came a few days after I confirmed my graduate journey as a Blazer. Somehow, I knew it would happen that way. 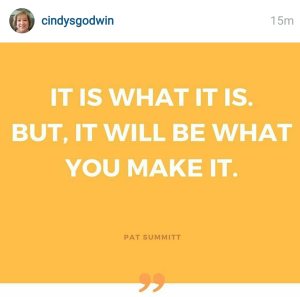 Nevertheless, I felt a strong connection to Knoxville because of one person. An unapologetic Shero that seemed to radiate from my TV screen each time I saw her. I could feel her fire and touch her tenacity. She was a lifter of those around her and you could see it in the eyes of her Lady Vols.  For me, “The Summit” (as I called her in my mind), was a cataclysmic collision with athletic machismo. Her hand claps sent shockwaves into decades of prejudice and discrimination toward women and her stare would make any referee, coach, or player rethink their behavior.

In light of the news of her passing, what did I learn? What did I hear before bed last night? One lesson.

You can’t argue with excellence.

In the beginning it was a factor, but later… after sowing sweat and sincerity, it didn’t matter that she was female. Her excellence superseded her gender. In the end, she understood that either you be great or you go home and come back ready to be great. That’s all you have to choose from. You do the work behind the scenes and you eliminate the opportunity for inferiority and self-doubt to halt your drive. Sure, I could go down the statistics and accolades, but I’d like to point out the less-than-shiny ones.

This is greatness. This is excellence at its finest. It starts at the bottom; it starts with service. With every perceived act of smallness, she exuded exponential positivity with a side of moxie. She was a powerhouse before anyone acknowledged that she had the juice… and she didn’t wait for them to figure it out. Her consistent investment in others yielded residual dividends.

The Summit” yelled. She passionately pressed her players without apology. She paced across the attic of America’s glass ceiling with her 5’11” frame and dared anyone to say she couldn’t back up every seed she had sown. Her brand was excellence, and she trusted the product she poured into others. Whether or not the sexists acknowledge her equity, she was definitely not outworked. Her determination put more wind in my feminist cape to keep flying above gender stereotypes. Now, she has gone in the same fullness in which she was came.

I’m grateful that she was great before she went home.

Peace & Thanks for listening.

Educator, Creative Soul, Faith Walker - All posts by C. J. Wade are property of The Write Wade Publishing Company, LLC (thewritewade) and posts by guest bloggers are shared jointly with thewritewade and their respective owners. -

A "no" here is a "yes" somewhere else, so eat those "no's" for breakfast (thanks, Madam VP).⁠
I will forever believe that God gave us one job and we are stuck in the classroom trying to get it right.⁠
Prayed 4/7/21 @ 5:20 AM⁠

listening at the speed of life

For Those Who Love History and Birmingham